by Parasnath
in Banks, Featured
0

Several issues crucial to the functioning of cooperatives were discussed threadbare in Delhi High Court in the matter of Nafcub in which the two cooperative stalwarts-Jyotindra Mehta and Mukund Abhyankar clashed. The verdict was delivered by Hon Court of Mr Justice Vibhu Bakhru on 25th May, 2017.

What was intriguing was that while the removal of Vipul Chaudhary through a no-confidence motion as the Chairman of GCMMF was upheld by the High Court and subsequently by the Supreme Court in the past, the same was not true in the case of Mukund Abhyankar. The learned judge has given argument for this.

It bears recall that Mukund Abhyankar had filed a petition in Delhi High Court under Section 9 of the Arbitration and Conciliation Act, 1996 praying to stay the email notice of NAFCUB Chief Executive Subhas Gupta for holding the 151st board meeting aimed to discuss the no-confidence motion against him.

Abhyankar petitioned the High Court to restrain the Chief Executive and others from holding the meeting till the matter is settled.

To repeat the chronology of events at Nafcub, Abhyankar was elected as the President in February 2014. He was removed through a no confidence motion in February 2016. He went in for arbitration and the sole arbitrator delivered an award on 29.09.2016 in Abhyankar’s favor. The execution petition for enforcement of the said award was filed by the petitioner and is pending before the High Court.

Presently, the Hon High Court discussed at length if an elected person can be removed through no-confidence motion. The Court noted that the question as to whether a body which elects its representative would have the power to remove the office-bearers by passing a no confidence motion, in absence of any specific power, has been a subject matter of much debate before various courts and the courts have given conflicting views.

Some observations made by the Hon High Court are worth reading for those active in the cooperative sector.

The Court observes “Apart from the limited functions as expressly provided under the Bye-laws, the President or chairman is entrusted with the functions and powers as delegated by the Board of Directors. Given the structure of the Byelaws, the role played by the President in absence of any confidence by the Board of Directors would, at best, be truncated; surely, the Board will not delegate any powers for him to exercise.” 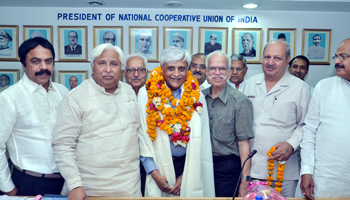 and in absence of any statutory provision, rule or bye-law, there would be no inherent power to remove an elected person prior to him/her completing the tenure by passing a no confidence motion. Common law principles are not applicable in election law and unless there is a specific provision for recall of a person elected to an office, his tenure cannot be truncated. There is little scope for applying equitable principles or notions of democratic functioning for interfering with an implied power of recall.”

Delhi High Court says “Whether the decision of the Supreme Court in Vipulbhai M. Chaudhary case can be considered as a binding precedent considering that the said decision was rendered in the context of the Ninety Seventh Constitutional Amendment which had been struck down by the Gujarat High Court in the case of Rajendra N. Shah v. Union of India and Anr. (supra).”

In Vipulbhai’s case, he was removed from the office of chairperson of Gujarat Co-operative Milk by a no confidence motion. He challenged the same by filing a writ petition before the Gujarat High Court. The Hon’ble Single Judge based on many judgments from the past held that even in absence of any provision in the statute, a no confidence motion could be brought against elected office bearers.

A plain reading of the decision of the Supreme Court indicates that the court extensively referred to Part IX B of the Constitution of India, which was introduced by the Constitution (Ninety seventh Amendment) Act, 2011 to emphasize that the democratic functioning of cooperative societies had been accorded a constitutional status.