In a bid to interact with customers and know them better, Model Co-operative Bank is currently engaged in organizing Customer Meet in different parts of Mumbai. While the first such meet was organized in Andheri(E), the second one was held at Borivli.

Led by the Chairman and senior officials, these meets invariably organize interactive sessions where customers are encouraged to speak about their experience.

In the 2nd Customer Meet held on 16th January 2020 at Borivli, Dahisar and Malad Branches customers numbering more than 250 attended. The event began with the inaugural address being given by Albert W. D’Souza, Chairman of the UCB. He spoke on the current banking scenario and in particular the performance of Model Co-op Bank over the years.

He elaborated that FSWM (Financially Sound & Well Managed) status and the overall good performance of the Bank has been recognised by the various associations for all Co-operative Banks, at all levels as was evident from the fact that the Bank has won 11 awards in the last 5 years for their stellar performance.

“The Bank continues to grow from strength to strength and launches new products from time to time, the Bank is 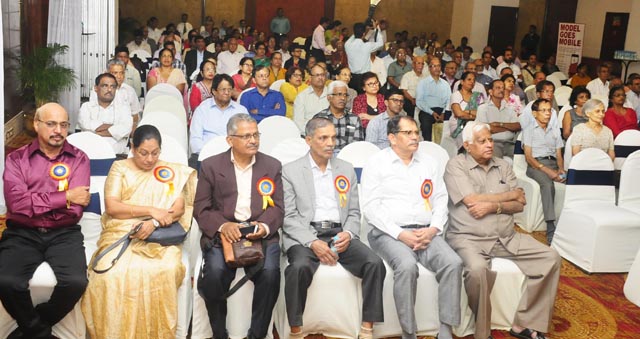 launching ‘Mobile Banking’ for the benefit of its customers, which will attract the younger generations to the Bank”, said the Chairman.

Vincent Mathias – Founder Director, was the next speaker and he gave a presentation on ‘Your money is safe with Model Co-op. Bank Ltd.’. He spoke on how the Bank has always ensured compliance with all the regulatory requirements.

The Bank has been regularly rated as ‘A’ by its Statutory Auditors which is evidence of the soundness and compliance level of Model Co-op. Bank Ltd, he stated.

There was an Interactive session where the customers were invited to speak. Many customers came forward and

The Bank’s first General Manager & CEO Frank Lewis was among the Dignitaries present. The evening ended with a vote of thanks given by Thomas Lobo – Director. Other Directors present on the occasion, included Marita D’Mello, Paul Nazareth, Gerald Cardoza, Sanjay Shinde. The event was compered by Mr. Zenon D’Cruz, Deputy General Manager.

The 1st in a series of Customer Meets was held at Emerald Hall, Hotel Kohinoor Continental, Andheri (E), Mumbai on 15th January.