Unnati Mela: When co-ops move in tandem with govt

by Ajay Jha
in Agriculture
0

Keeping pace with the govt, the cooperative sector displayed its skills and capacity during the three day Krishi Unnati Mela which concluded on Sunday with the valedictory address of Union Minister Radha Mohan Singh.

One can find well known co-op brands lining the stalls put up for the benefits of farmers. If fertilizer giants IFFCO and Kribhco were there, so were leaders of urban cooperative banks in the country-Saraswat Co-op Bank, PMC and others.

National Cooperative Development Corporation (NCDC) is said to have played a role in giving such a prominence to co-operatives, said a source. Several small Self Help Groups were also encouraged this time.

Our correspondent Rohit Gupta spent a day at the mela ground interacting with both farmers and co-op staff-members overseeing the stalls. His report:

IFFCO has set-up about 11 stalls with its subsidiaries like IFFCO-Tokio insurance company, IFFDC and others

showcasing their services and products.

”With a view to strengthening the IFFCO E-Bazar, through Krishi Unnati Mela 2018, we are listing farmers’ requirements to deliver our products free of cost to farmers. IFFCO has also set-up a Health stall for visitors”, the

Talking to Indian Cooperative one of the farmers from Uttar Pradesh said “GOI has given us platform to collect information about the agriculture sector under one roof and we are taking advantage of it”, he said.

Krishak Bharati Cooperative Limited-KRIBHCO, the second largest fertilizer cooperative of India is making efforts to make people aware of the proper use of certified seed in farming activities through a stall set-up at Pusa Campus, New Delhi on the occasion of Krishi Unnati Mela 2018.

On this occasion, several subsidiaries and member societies of KRIBHCO have also set-up their stalls.

in general about the importance of certified seed. In addition, they have setup seed testing machine to explain its operations to the farmers. That certified seeds play an important role in increasing crop yields needs no emphasis, Singh said.

One of the women visitors from Uttar Pradesh said the government soil testing is not done in a proper way and KRIBHCO can step in to help farmers. Kribhco experts assured her of their all possible help in soil testing.

Singh said Kribhco is organizing training programs across India to educate farmers with the help of its 17 certified processing Units.

It is worth repeating that KRIBHCO is actively participating in such Melas being organized for farmers. Hundreds of farmers from different states of the country were seen making enquiries and collecting information from the KRIBHCO Stall.

While celebrating its century this year, largest Urban Cooperative Bank of India Saraswat Bank had set-up a stall at Pusa Campus, New Delhi in a three day Krishi Unnati Mela , 2018.

While talking to this correspondent Ajay Jain, Chief General Manager, Saraswat Cooperative Bank who is overseeing the bank’s stall said “We have set-up the stall at Krishi Unnati Mela 2018 for the first time and we are getting positive responses from the visitors. Most of the visitors have very little information about cooperative banks but they are eager to get informed,” he said.

“Several visitors wanted our bank to open branches at Chandigarh, Jaipur, Bihar, Uttar Pradesh. We have noted their requests and we will discuss it with our higher authorities. Presently, our areas of operation cover six states including Maharashtra, Goa, Karnataka and some others”, he informed.

He said, “The Mela has given us a platform to create brand awareness among the common people. Visitors are extremely to get informed about the loan structure of our bank. There is a separate space for cooperatives where over 60 cooperatives are showcasing their services”.

Saraswat Cooperative Bank has two branches in Delhi and its team working in the National Capital Region has made sincere efforts to make its participation in the fair a success.

Readers would recall that Saraswat Cooperative Bank has entered into the centenary year and before completing the glorious 100th year the bank is organizing several high-voltage functions across India.

“People were querying us about the loan structure of our bank and visitors were collecting information about financial help the bank can offer for establishing Poly house”, said Silender Singh, Branch Manager, Tilak Nagar, 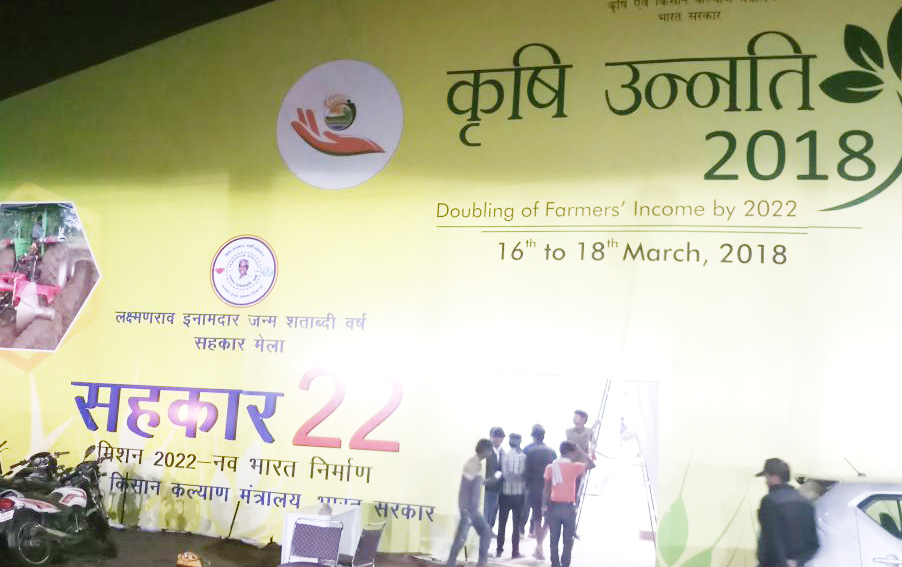 Singh said, several visitors suggested the bank should expand business at Buldana, Rajasthan and Uttar Pradesh. Many others sought information about the availability of loans for the dairy sector, he said.

“This Mela offers a platform for creating brand awareness among the common people who are much less informed about the cooperative sector. The PMC Bank has six branches in Delhi”, he added.

Several officials including Rameeta Sethi, Regional Head and others were present on the occasion.

There are about 1500 Urban Cooperative Banks in India out of which four banks namely Saraswat Cooperative Bank, PMC Bank, SVC Bank, Bombay Mercantile Cooperative Bank have participated in the Krishi Unnati Mela 2018. There are indications that many more cooperative banks will take part in such fairs in the future.

More than 800 stalls were set up by the central and state governments and various other organizations.