Indian Cooperative has, in the past extensively reported how farmers and co-ops bodies have helped govt in checking the incidents of stubble burning. It was the turn of the govt on Monday to say them “thank you”.

Thanking the farmers for bringing down the Stubble burning incidents, Parshottam Rupala Union Minister of State for Agriculture & Farmers Welfare requested further support and ideas from the farmers to ensure zero burning in all the villages. Over 1000 farmers attended the National Conference on Crop Residue Management in Delhi on Monday.

Inaugurating the National Conference on Crop Residue Management for the farmers from the states of Punjab, Haryana, Uttar Pradesh & Delhi the Minister said that success stories from these States should be shared with all farmers.

The Minister expressed his immense pleasure after listening to the good experiences shared by farmers and requested them to sensitize other farmers about learning from the Conference. Several farmers shared experiences and suggestions during the Conference, more than 1000 farmers attended from the 4 states.

Earlier, to support the efforts of the Governments of Punjab, Haryana, Uttar Pradesh and NCT of Delhi to address air pollution and to subsidize machinery required for in-situ management of crop residue through agriculture mechanization, a Central Sector Scheme for the period 2018-19 to 2019-20 has been implemented by Ministry in these States with a total outgo of Central funds Rs.1151.80 crores.

During the year 2018-19, total funds of Rs. 584.33 crores were released to the State Governments of Punjab, Haryana, Uttar Pradesh and ICAR. All three State Governments have distributed 32,570 machines to the farmers on individual ownership basis and established 7,960 Custom Hiring Centres.

This conference was organized in collaboration with ICAR in order to address concerns of farmers and State Governments. The straw burning events in 2018 have reduced by 15% and 41% as compared to that in 2017 and 2016 respectively, as per the report of the High Power Committee Chaired by Dr. Nagesh Singh.

During the Conference, 20 farmers from Punjab, Haryana and Uttar Pradesh were honoured for their valuable contribution in management of crop residue by using identified agricultural machinery, as well motivating other farmers of their village for in-situ management of crop residue to stop the straw burning. The Minister also launched a multilingual Mobile App “CHC Farm Machinery” for the farmers to avail the custom hiring services of CHCs located in the radius of 50 Kms. This app connects the farmers with Custom Hiring Service Centres in their area. This app can be downloaded on any android phone from Google Play Store. 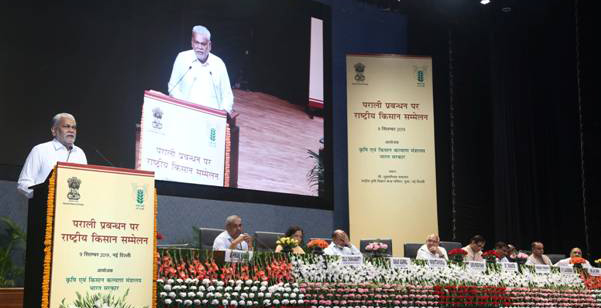